I need this rebuke right now- as I’m “unconsciously” super cautious to blog (this very entry).  Am so worried that whether my question title will turn to be an embarrassing question ever?

In November 2017 when Mugabe was peacefully overthrown, I argued that Zimbabwe and Kenya are a sign that Africa is indeed rising. Somebody, an academic scholar, in a whatsapp group (Wanazuoni)- challenged my argument saying “it was a hushed blog”. Today, I remembered this criticism and was a bit worried- whether am hushing or not.  Time has shown that my argument in Nov. 2017 was not hushed.

Well, since when people started to walk into Uhuru Park for #Raila Swearing In ceremony, I kept thinking “what an amazing demonstration of freedom of assembly?”. I kept, in my mind, admiring Uhuru Kenyatta’s wisdom- to allow that. As a sitting president he has all means to disperse the crowd and arrest the leaders who planned it. He could even do so with a legal backup-  he is legal sitting president, why is someone else overriding the constitution? Yet, he has let #Raila and his  #NASA to go on with their plans. I can’t imagine how the situation would have been in some other countries- teargassing and chaos to say the least! 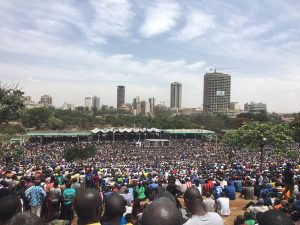 This has underlined one fact- Uhuru is a very “secured” President and an extremely secured man. He knows who he is. He is not controlled by power. He controls the power that he’s go. In fact Uhuru attended the recent AU Summit while knowing that in few days #Raila is going to be “sworn” in.

So, I think there is a lot to learn from Uhuru Kenyatta as a politician. Remember in  August 2017- he agreed to repeat elections after he was declared a winner – and also in 2014 he agreed to leave office for one month to attend hearing in Hague – from which he could have “ignored” like his neighbour in Sudan.

Let’s see – but I will not wonder if history will soon come to record Uhuru Kenyatta as a democratic and peaceful African leader.

I urge other leaders in the region- and the whole world to learn from Uhuru Kenyatta – They should relax like him…I think “relaxing” is an of the leadership art. Isn’t it?

(…On the other note, Badejo was really right when he wrote- #Raila Odinga: an enigma in Kenya’s Politics)

(My discipline background- keeps challenging me (as I write) on state theory and government….- I will ignore those systematic analysis for now, for the sake of highlighting democracy and giving credit to those who honor democratic ideals).

One thought on “Is #Kenya becoming a #democratic icon under #UhuruKenyatta? …#RailaOdinga Swearing In Ceremony #Democracy #FreedomOfAssembly”