Yesterday I was graced to attend the launch of the Children’s Book Festival held in Dar Es Salaam. The festival was organized by Soma Book Café, which promotes children literacy and reading habit. Mama Demere Kitunga with Mama Salma Kikwete as the Guest of Honour led the event. There were excellent children performances including theatre story telling through dancing, narration, and acting.

Due to my poor writing skills, I cannot capture the unforgettable ambiance of the festival, but in this entry I will briefly express my admiration to this event and highlight the excellent work done by Soma Book Café!

What impressed me the most is that this event was totally dominated by children. These children were from public primary schools in Dar-es-Salaam. They used the theatre to do story telling through dancing, narration, and acting. Everything was in Kiswahili hence very sweet. The children spoke perfect Kiswahili. They are very talented. I cannot stop thinking of a young girl (may be 8 years old) who narrated the story of “Mbwa na Panya”. She is a star. Brilliant. Fluent. Her talent cannot be contained and her star shines. All of the kids who performed had unique artistic talents that were very vivid. Another story that was narrated by acting and dancing was “Mfalme Ndevu na Masikini Mkata Kuni”. Below are some of the pictures I took with my phone: 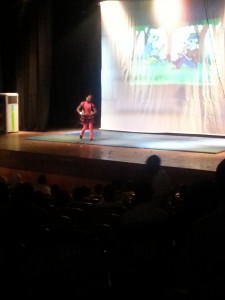 A pupil (Shule ya Msingi Kisutu darasa la 5a) narrating the story of Mbwa na Panya with excellent choreography depicting Swahili culture…I loved her Kiswahili with Dar accent…she is a star! 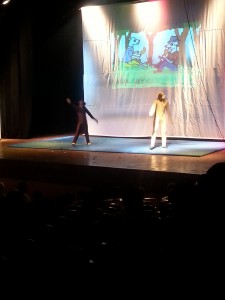 So when I walked in National Museum, I saw state cars, and the word was that Mama Salma Kikwete is the guest of honour. I walked inside the theatre but I couldn’t see her (you know we always expect such people to be sitting in front or somewhere visible to everyone). Then after children’s performances it was now her turn to give a speech and officially launch the festival. I saw her standing from the middle of the audience as she had seated with other people. When she went to the podium/stage, she did not do the usual. Although she started with normal protocol observations, she immediately switched from being the first lady and guest of honour to a teacher. Her focus was on the children present. She set up the stage as a classroom. She engaged children, gave them small exercises to contain focus, sang with them, and started reading a story to them. The story was “Tabu wa Tairi”. After the story she started asking children questions as a way of interpreting the story and related it to children’s daily lives and expected/good behaviour. The emphasis was on respecting parents, elders, and teachers as well as loving school. Some of the Q & A caught my attention…and my corrupt analytical/critical mind started its crazy assumptions…

Mama Kikwete: Sawa sawa, na baba ni mwanaume (this caught me…somehow I thought her emphasis on the sex (male figure) was interesting…may be she just said it…but as I said my corrupt mind insists that a point was driven home…those who understand me, please do….#FairEnough)

And the Q & A continued with more interpretations to the story. All children present understood the story and engaged fully. They were very happy and free. This was evident.

Mama Kikwete then went back to finishing up her speech. She explained that being a teacher is a call. It is evident that she understands issues of teaching and teachers in Tanzania. She talked a bit about her experience as a teacher…and of course she had to say what her husband’s government is now doing to improve teacher’s welfare…I don’t want to go into this debate now.

But what I want to underline here is the fact that I fell in love with our first lady yesterday. She is very real, down to earth, beautiful, and to the point. She engaged with the children, she fitted very well with other women who were there, and she was vividly touched by the great and amazing work done by Mama Demere Kitunga and other education loving women present including Elieshi Lema.

Soma Book Café together with other stakeholders such as Baba Watoto are initiatives that need to be promoted by parents, government, and everyone in the community. These are the education initiatives that donors should look at. Their impact on the ground is real and it’s direct to children. It is an unpolluted impact. I was very touched because these initiatives deal with children who are from normal family backgrounds (who are majority in Tanzania) and who go to public schools. Such children are the true picture of Tanzanians and they will always be patriotic to the country and embed our identity. They are Tanzania!

Seeing children performing and the work done by Mama Demere rejuvenated my hope for Tanzania. We have a future and let’s keep building it through our very talented children who are spread all over the country. Let’s help them realise their dreams through reading!

Big up to Soma Book Café, you can follow them on @SomaMkahawani

The book festival continues at National Museum up to Sat. 14th June…you all should go…