History has, repeatedly, proven the power of faith. Faith/religion, although sidelined for many years by Political Scientists, has never stopped exerting its muscles on national or international politics.  The impact of such could be fatal to an existing regime. Think of the recent history of Iranian Revolution of 1979.  The impact and the role of faith in politics is double-sided. In that, it could be negative or positive. Terrorism, for example, brings up the negative side of faith. On the other side, the role of faith in development and provision of social services across the world underscores the positive role of faith.

The power of faith in Tanzania

In Tanzania, the role of faith has been, mostly and significantly positive. In  early 1990s, for example, when the government inability to provide social services to its citizens got it into its knees, faith groups came together to rescue the situation. Although these institutions had already been providing education and health services since post-independence era, they signed a memorandum of understanding with the government and formed Christian Social Services Commission (CSSC – included the Tanzania Episcopal Church and Christian Council of Tanzania) as the main partner to provide health and education services in the country. If the members of this commission decide to stop providing these services today, I bet the country’s health and education system (in particular post-primary education) will immediately collapse.

Tanzania is still, a hugely, religious country although it’s constitution is secular. Most Tanzanians openly practice their faiths and attend their religious services on weekly basis. Even if we go with the politically justified “statistics”, then at least 66% of Tanzania follow a formal/structured religious faith.  Faith leaders are some of the strongest and most respected leaders in the communities. Faith leaders are the ones who are closer to the people more than any other institution in the country. This is, actually, a global feature- as the World Bank study, Voices of the Poor, attested.

It is thus imperative for any Tanzanian politician to discern the power of faith leaders and their potential hard impact.

Food Politics and manifestation of faith power in Tanzania

The recent droughts in the country have brought an interesting debate on whether there is a food shortage or not. Whereas the citizens are complaining and worried about hunger, the government is denying it. In his recent speeches, the president has categorically banned the government to participate in this “debatable” discussion by rebuffing even the discussions of it. In a related speech, the president has even warned newspapers that are supposedly inciting dissent. Rhetorically, he has denied that there is no hunger in the country – arguing that “the one who knows if there is hunger or not in Tanzania, is him, the president, and not a politician or any newspaper”

Nevertheless, religious leaders have strongly come up with opposing statements.

Over the weekend the TEC Secretariat sent a memo to all Catholic priests to lead special prayers against drought and consequent hunger, 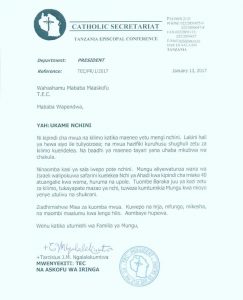 so were the Muslim leaders through the Muslim Council of Tanzania (BAKWATA).

On Sunday, during an installation service to Meru Diocese Bishop, the ELCT-Tanzania presiding Bishop, Rev. Dr. Fredrick Shoo, spoke about it (listen to the video below).

It is obvious that the faith leaders were responding to the presidential statements. This is a highlight of the power that faith leaders assume. Rightly so. In that, they can challenge the government. It is thus, the case that religion can be a check to government.

Moreover, it is encouraging to see that, apart from a few remaining politicians who can openly critique the government, there are other opposing and critical views emerging. This underpins the essence of democracy that is beyond opposition powers.

The role of faith in this case should be considered as positive. In that, it could give a critical voice, which is a healthy sign to any country that wants to reach its development goals. A smart government, in this situation, would have an ear that is meek to listen to this opposing voice that is morally strong. Its soft power is unwavering. Although without an army, it is probably the most powerful force. The faith power is the matter of the heart…when the heart and the stomach are combined, the impact could be fatal.

4 thoughts on “Food Politics: manifestations of power between government and faith groups”