Interesting manifestations have happened this week regarding the East African Community.

On Monday, 13th, I was lucky to attend a hearing on application of a case against members of EAC on EU/EPA negotiations and signing. The case was heard in the East African Court of Justice by three judges. The table was composed of respondents who were the representatives from all six-member states Attorney Generals (AGs) against the applicant duly appointed agent. 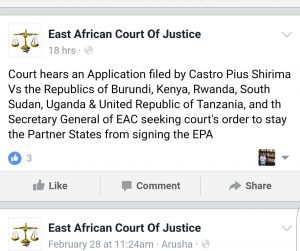 Following the presentation of the applicant’s agent argument on the case, I carefully listened to the AGs representatives from different countries. They had a common argument – SOVEREIGNTY, which was mostly underscored by the Kenyans and Rwandans (of course because they have already signed EPA). The other argument that was shared was on the jurisdiction of the court to hear the case.

Despite the temptations of delving into the AGs representatives’ misconception of sovereignty, I will move beyond  to highlight the saddest aspect of those arguments in brief.

The arguments manifested the inherent colonial mindset present in African policy making tables in spite of having been politically liberated 60 years ago. This colonial mindset is an infection that is deeply rooted and justified through legal and academic technicalities that are informed by the same colonial perceptions. The fact that member states were defending the signing of EPA on the grounds of Sovereignty is absurd. EPA is a partnership with an institution that has diluted (although now failing hard- i.e. Brexit et al) the concept of sovereignty.

Random question here: How can then African states diminished its own institution, which is built to, among other things, ensure their sovereignty through joining efforts against powerful global hegemonic forces?

It was further saddening to see member states saying the court has no jurisdiction to decide or rule on the issue of EPA. Now, if these member states are looking down upon their very own institution in order to pave way for an unfair partnership with an institution that builds similar organs of itself? Where is our future?

Of course, there is a huge division among EAC member states on the issue of EPA. Three-member states- Kenya, Rwanda, and Burundi (from what was said by Burundi AG rep at the court) have already signed while Tanzania, Uganda, and South Sudan have not yet signed. The recent rhetoric between Uganda and Tanzania presidents associated EPA with colonialism. In October 2016, the EU and the Summit, which is the highest decision making organ of the EAC, extended time for member states before they will meet again to deliberate on the same. The division in the community is real. Almost a return to a 19th century “divide and rule” evil.

In my reflection on that, I remembered Jesus’ words from Matthew 12:25b “Every house torn apart by divisions will collapse”

As if that was not enough, on Friday, 17th March, I read on my Twitter TL, that the East African Legislative Assembly has warned on the possible collapse of the Community due to the failure of its members to pay their contributions.

The EU has funded the EAC, and mostly the office of the Secretary General. This is because the member states are mostly unwilling to invest in the community. It is thus a “winter is cold” phenomenon that EU feels entitled to  pressure members to go against the Treaty and sign the unfair trade deals with much arrogance to our very own custom union that we are trying to establish.

This was another manifestation of the cracks underneath the foundations of the Community. These cracks, might have been inherited from the former 1960s EAC that collapsed in late 1970s. The path may be the same.

It is probably high time that members come out open and deliberate on the future of EAC without continuing wasting resources and time in engaging with non-issue matters. Similarly, if the impact of EAC as a community is not felt on citizens’ daily lives, the community remains to be elitist and non-beneficial.

Africa must get practical. I beg members of EAC – under the current leadership/chairmanship of the most vibrant leader in the region, who has been considered a no-nonsense president, Dr. John Pombe Magufuli, to revisit its vision and decide whether it is worthy it.